Nothing compares to the simple pleasure of a bike ride.  ~John F. Kennedy

The one somewhat touristy thing I did while in Quebec City was go on a bike ride to Montmorency Falls. (Pronounced mawn-maw-rahn-see in Quebec, not mont-more-en-see like I first said it. Aussies really do butcher the French language!)

It’s a leisurely 10km ride to the Falls following a bike path that extends all the way from downtown Quebec. The absence of hills is an added perk! Bike hire is available from Cyclo Services.

Once at the Falls, there are multiple viewing points. 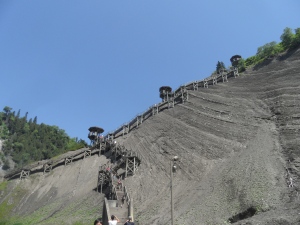 There’s a park at the top of the Falls where you can have a picnic lunch and a nap.

While it’s no Niagara or Iguazu, it’s still a pretty impressive waterfall. Combined with the ride, it makes for a fun day trip if you’re looking to get out of the city.