I wasn’t sure I could do it (and at times I wasn’t sure I wanted to do it) but for 10 days I got up at 5.30am, did four hours of yoga a day and consumed no meat, no eggs, no garlic, no onion, no alcohol and no caffeine.

I had enrolled in the Sivananda Yoga Camp, held at an ashram in the Laurentian mountains an hour north of Montreal. 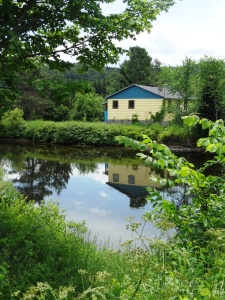 The ashram had a strict routine, each day the same.

If you’re wondering why anyone would voluntarily participate in this, let me explain.

I’m not one of those die-hard yogis (or even a little bit yogi) but I do the odd yoga class and had been dabbling in meditation for a couple of years. I figured this yoga camp was a good way to learn a bit more about both disciplines in a place where I would be forced to practice. (They actually kick you out if you consistently miss classes and satsang.)

After seeing the daily schedule, my first thought was “how am I going to make it to 10am without eating?!” This was quickly followed by “how can I last from 10am to 6pm without lunch?!”

On the first day, my body seemed to be ok with the morning fasting but I was starving by 4pm, and still had to get through a two-hour yoga class. But within three days, my body had adjusted to the routine. They give you so much food and it’s all vegetarian, local and organic. I guess if your body is fed in a nourishing way then you don’t crave junk food or feel hungry.

I had the same concerns about going without caffeine, especially with the 5.30am starts. But again, my body adapted and it wasn’t as hard as I thought to get up so early. (It helped that satsang was compulsory so I couldn’t make excuses and stay in bed.)

The third psychological hurdle for me was the thought of doing four hours yoga a day. I normally do one-hour classes at the gym and they cram so much in that it’s a pretty intense 60 minutes. I knew there was no way I was going to be able to do double that amount of time, and then a repeat class.

But the great thing about the Sivananda practice is the emphasis on rest! The first 20 minutes of the class is just relaxation and breathing. This is followed by Sun Salutations and then 12 asanas (poses). There is a generous Savasena (lying on back, relaxing – otherwise known as corpse pose) between each asana and at the end of the class. This was definitely my style of yoga!

In saying that, the repetition did get to me at times as it’s always the same class. But I definitely got a lot stronger and improved my yoga technique by sticking with it.

The outdoor yoga space. Much better than practicing indoors!

The thing I struggled most with was the meditation. Not only is it really hard to concentrate for half an hour at a time, the floor is also hard! Without fail, I would start squirming and fidgeting by the 15 minute mark and was amazed that no one else felt the need to move. (Although there was definitely a collective sigh of relief once the half hour was done!). Obviously I still have a long way to go.

We did a silent walk on Wednesdays and Sundays instead of seated meditation. Much easier!

We were down at the lake, sitting in silence by 6.30am

By the end of the 10 days, I was feeling waaaaaay more relaxed and calm. But I did boomerang a bit with my diet when I got back to “civilisation.” While I didn’t need it physically, I must admit I did feel a bit of a psychological void without caffeine, alcohol, meat, eggs, garlic and onion. But after the initial backfire subsided, I did feel like I was left with a much healthier respect for my mind and body.

Footnote: Some pics from around the beautiful grounds of the ashram 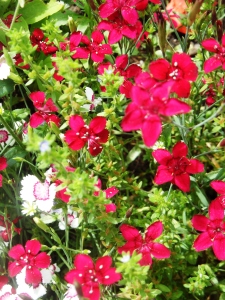 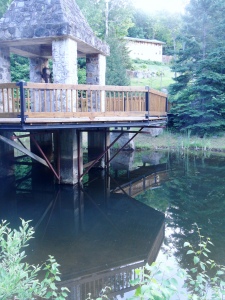 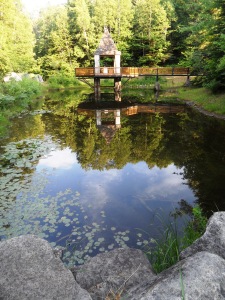 Montreal. Summer. Outdoor music festival. Some of my favourite bands.

There was no way I could miss out on Osheaga 2012!

Here are my favourite moments from the three-day festival.

1) Racing from the airport to Parc Jean-Drapeau to try to catch the Hey Ocean! set.  I made it there just in time to see the last five minutes of their show, which just happened to feature a cover of Whitney Houston’s I Wanna Dance With Somebody. Woooo!

(I overheard someone after the show say that they didn’t play “Fish” – my favourite song of theirs – so I felt slightly better about missing the majority of the set.)

2) Seeing the lead singer of Yukon Blonde throw his sunglasses into the crowd in the first five minutes. That’s fan dedication – it was really sunny! (They played a great set in the sweltering heat, which must have been really tough with all that hair!)

3) Of Monsters and Men

I have only recently gotten into this band and they rocked their set!

4) Watching MGMT (which was a sound and light show in itself) while the finale of the International Fireworks Competition went off in the background.  Ah-mazing!

1) Lounging around on the grass with the festival music in the background. Day two was hot, hot, hot and we spent most of the day spent chilling out and trying to escape the heat.

2) Reliving the 90s through a nostalgic set from Garbage. Shirley Manson has barely aged at all and is still as feisty as ever!

Although Garbage haven’t released any new music in the past seven years they were still one of the biggest acts at the festival. Really says a lot about their staying power!

They have been one of my favourite bands for years and they definitely delivered! When they played New Slang in the pouring rain, it was magic, just magic.

Mucho excitement as The Shins come on stage!

My friend Sonya had introduced me to Passion Pit only a few hours before we arrived and I instantly loved them. So it was really cool to see them live that same day, especially through a set of alternating torrential rain and sunshine.

Singing, clapping, crowd surfing,  jumping around, beach balls, people swaying on other people’s shoulders…the crowd was so into it, you couldn’t help but get caught up in it all!

After two days of blistering sun, the rain was such a welcome relief. There’s something about being wet and muddy and just not caring! 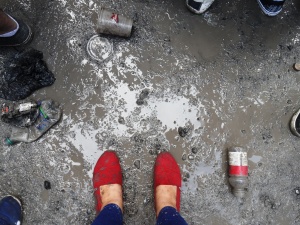 The mud pit at the Main Stage