Ghosts of Travel Journals Past: Part 1

Back in 2008, I did a five month backpacking trip through South East Asia, Ireland and Central and South America, finishing up in Vancouver where I went on to live for a year and half.

Back then, this blog didn’t exist and my leather-bound journal was my constant travel companion. I’d spend hours making trip notes on planes, long bus rides or any other time I had a spare few hours to while away (happens frequently when you’re backpacking!). Even now, I still like travel with a notebook to jot down blog ideas or observations but the notes are fairly haphazard and may just be a word or dot-point to jog my memory.

When my sister came to visit me in Vancouver, I sent my travel journal home with her and promptly forgot about it…until this Christmas when out-of-the-blue she uncovered it in her old bedroom.

I was so excited at finding this time capsule of travel adventures, I devoured the whole thing in one reading. It was so fascinating being back in my 26-year-old head, trying to navigate my way through new places, cultures, languages and food!

Reading back through that journal, I came across all sorts of memories and experiences (good and bad!) that I’d forgotten all about. I thought I’d use this blog to share some of these extracts.

This entry is Part 1: South East Asia [2013 commentary in brackets].

“I’m feeling so much calmer about this trip than I have in the past. I think it comes with the realisation that people are just people wherever you go. There’s always someone who can help you, always someone new to meet!” [This was day one. Love the optimism and positivity that comes with starting a new trip!]

“I’m so glad I bought a travel neck pillow in Sydney. It’s been the best $18 I’ve ever spent.” [Five years on, this is still a travel essential]

“If I could describe Hanoi in one word it would be “Beeeeeeeep” because that’s all you hear all day and night as cars and motorbikes pass someone.”

“Shopping has not been good for the self-esteem. I even shopped in a store called “Big Size” and everything was too small!”

“Sitting out the front of a street vendor at 3.30pm, drinking 20c beer and watching the bustling Hanoi world go by.” 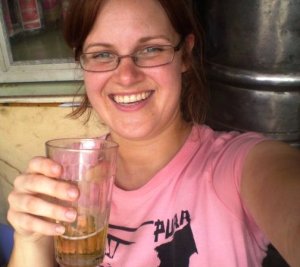 “Got my fortune told by a 90-year-old Vietnamese woman. Apparently I will meet my husband next year, he will have tanned skin. We will get married when I’m 29 and have three kids.” [None of this actually happened!]

“The most random music: Richard Marx to Pulp Fiction soundtrack to Khe Sanh to techno.” [Bar in Hue, Vietnam]

“Had snake wine (spirits with a preserved cobra in the bottle).”

“We just happened to be there for the Lantern Festival which is only once a month. So beautiful!!” [Hoi An, Vietnam]

“Cu chi tunnels were amazing. It’s hard to imagine that there are 250kms of them – all dug by hand. Climbed through 50m of tunnel. Although they had been widened for tourists (!) we could still barely fit.”

“There is some pretty extreme poverty here. Everyone seems much poorer than in Vietnam. Children selling wares on their own until 10pm.” [Phnom Penh, Cambodia]

“We went to the genocide museum where people were imprisoned under the Pol Pot regime. I can’t believe that such atrocities have happened. It wasn’t just the conditions but the methods of torture that the prisoners were subjected to. Many of the Khmer Rouge were only kids (14-25 years) who were targeted because they were at an impressionable age…I found the whole experience quite distressing.”

“Lost my keycard in Cambodia and then realised my credit card didn’t have a PIN. Had a few moments of panic thinking that I would be unable to get money out. Luckily I could get money out over the counter but it served as a good lesson: always keep ATM card and credit card separate and have a stash of emergency cash.” [Although I brushed it off in my journal as “a few moments of panic” in reality, there was much, MUCH panic (I think I even cried) at the thought of trying to travel cashless while I got a replacement card. Luckily it all worked out!]

Let me know if you’ve had similar experiences in South East Asia!

Head-For-The-Hills, Back in Town

After a five-month blogging hiatus, it’s good to be back!

It was my 2013 New Years Resolution to get back into blogging regularly, but I wasn’t really sure where to start. Head-For-The-Hills was conceived as a travel blog, but now I’m back home in Australia (more on that in future posts) and trying to live in the “real world” again. Where did that leave me?

I started to think about possible blog posts and realised that I’m still a traveller a heart, even though I’m not on the road. My current challenge (and one I’m sure is shared by everyone who spends an extended period overseas) is how to retain that backpacker spirit of freedom, adventure, curiosity, and spontaneity once home. This will be a major blog theme this year.

I also have a couple of residual travel stories to write-up from my trip last year, so expect to see some back-dated posts this month!

Finally, in an effort to improve my (very amateur) photography skills, I’m starting a project I like to call “2013 in pictures.” Every day this year I’m going to take a photo that encapsulates something significant that happened or my feeling about the day. I’m looking forward to seeing how the year pans out (photos posted monthly).

I’d leave to hear about your blogging resolutions for 2013. Feel free to leave a comment!

For my first post, I thought I’d acquiesce to logic and share my motivation for creating this blog.

There are literally millions of people vying for a slice of the online space through blogging; why should I add to the already saturated market? This is a question I posed to myself many times before starting this blog, but a couple of recent events forced me to reconsider my position.

Getting sucked into the Twittersphere

I am, by nature, a late adopter when it comes to technology of any sort (still clinging onto my 2007 Nokia phone for dear life) and Twitter was no exception. But after finally jumping on the bandwagon, I saw that there was this fascinating and tangled web of people and organizations all over the world interacting with each other and sharing thoughts, opinions, information, ideas, feelings and images. I realized that I wanted to be a part of that online community.

This summer I’m heading for the hills (blog name, *cough*) and doing the iconic cross-Canada road trip for three months. Although I always keep a travel journal for myself (compulsory when you have the memory capacity of an 80 year old), I wanted an easy way to be able to share my experiences with family and friends- especially those back in Oz who I am shamefully bad at keeping in regular contact with. (I am also hoping this blog atones for refusing my parents’ Facebook friend request.)

And maybe, just MAYBE, some people I don’t even know might read this.

It wasn’t so long ago that the trusty Lonely Planet guidebook was my primary source of travel info. Now, like most people, the internet is my “go to” for trip planning. No longer do you have to turn up at a hostel and “hope for the best”; you can check out recent recommendations and ratings beforehand. While I admit this does take some of the adventure out of travel, at least bedbugs are less of a worry! It would be cool if I could, at least in a small way, return the favour for all the travel tips I’ve gleaned online.

This year I decided to foster my inner spelling/punctuation/grammar geek and do a copy editing course (alert me immediately if you notice any of the aforementioned errors on my site!). Since January, every Wednesday night has been spent with a group of people who primarily write for a living.

By listening to their experiences and doing a lot of writing exercises in class I came to see the satisfaction and challenge in composing something that contributes to the public sphere of knowledge and understanding (or lack of, if it’s written badly!). It forces you to critically analyze your writing in a way that does not (and should not) happen when you write for yourself. What it means for this blog is that my writing will (hopefully) become less about organizing my thoughts and “venting” (although I’m sure I’ll rant about SOMETHING at some stage) and more about having a creative outlet and contributing to the online dialogue.

Thanks for reading; I hope you’ll continue to check out what I have to say.

[If you want to be alerted via email when I post new content, there is a link on the first page which allows you to “follow” me]