When we decided to do a two-week trip around “The Rock” starting early May, we expected limited opening hours and less frequent services, but with the bonus of less tourists and cheaper accommodation. Little did we realize that pretty much everywhere outside of St John’s goes into hibernation throughout winter and spring and doesn’t open again until late May or early June. Nowhere was this more apparent than when we traveled to the Eastern Peninsula.

Our first stop was the little storybook township of Trinity.

Trinity is quaint to a tee but unfortunately there was nothing open or happening when we were there so a quick drive around was all we could really do.

We then drove to Bonavista, hoping to continue our streak of good luck and spot iceberg number three (having already seen one off the coast of both St John’s and Pouch Cove). Unfortunately, true to its reputation, the Newfoundland weather decided to turn. With fog so extreme we couldn’t see 20 meters in front of us we missed the (apparently gorgeous) coastal views and dashed all hope of another iceberg sighting.

The only indoor thing we could do was eat (not to say that was a problem for us!). The cheap cheap homemade slices and desserts at the  Walkhams Gate Cafe hit the spot and was probably the highlight of our day.

As the day was winding down, we headed back to Trinity East to check into the hostel we had booked online. After circling the town to no avail (houses do not have street addresses here), we eventually asked a local for directions. Her response: “I don’t think that place is open yet for the season.”  Shit.

Sure enough, when we arrived at the property it was locked and deserted. Shit.

We debated our options. Camping was out of the question as there was no way our summer tents were going to hold up to the gale force winds blowing outside. Sleeping in our tiny tiny Kia Rio was a possibility, but not an appealing one. We had one last beacon of hope – the service station that was still open. If there was a place to stay in this town, they would know.

They suggested the Parkside Inn down the road. As we approached the Inn, our eyes lit up… 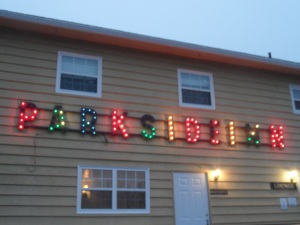 And they had a room!!

We ended up having a great night, chatting to the bartender, Debbie, for hours about life in Newfoundland. I can also credit her for introducing me to the delicious local beer, Dominion Ale.

We had such a good time we stayed a second night to check out the local “dance” (a big deal for the town, attracting people from 10 surrounding communities)

The promo poster for the dance.

We were also fortunate enough to have some rare sunshine the following day which allowed us to do the beautiful Skerwink Coastal Trail. 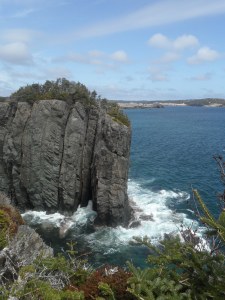 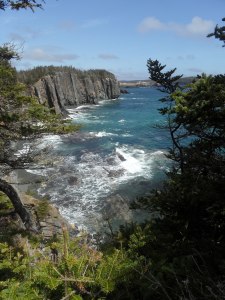 Sometimes things have to go wrong before they go right, I guess. But we learnt our lesson: always call to confirm that places are open before arriving!