Most of the time it works out; sometimes it doesn’t. But they’re odds I’m willing to live with to allow maximum trip flexibility (and if I’m being really honest, procrastination also plays a pretty big role).

While staying in Digby, I had a rare moment of organization and decided to book a hostel and shuttle two days in advance of my next destination, Mahone Bay. Of course, this also happened to be the one time when my plans changed at the last-minute. As we say in Australia, bloody typical!

This change of plans was spearheaded by Erika’s arrival at the Digby Hostel (a great place to stay, by the way). Erika is a fellow Aussie who also happened to be travelling around Atlantic Canada (and the rest of the world, actually!). But there was one big difference between Erika and I – Erika had a car!

(Background Note: I also could have rented a car if I had bothered to get an Ontario drivers licence in the 1.5 years I lived there – one of those times procrastination did not work in my favour – and I had not realized one week before my three-month trip that my Australian driver’s licence expired in November 2011. So I was travelling around Nova Scotia without a car; a bit of a hassle!)

Anyway, back to Erika and her car.

Erika was planning an awesome trip for the next day, a day trip I had wanted to do but it would have been impossible without a car. After deciding she was a pretty good sort (there haven’t been too many Aussies I’ve met overseas that I haven’t liked), I agreed to join her and promptly cancelled my other plans.

Here’s how our day panned out:

11am: Annapolis Royal Farmers Market (half hour from Digby)

Local food, live music and art/craft vendors on one of North America’s oldest streets (in terms of European settlement). Spent a lazy hour wandering around, chatting with all the vendors (Nova Scotians love a good chinwag!). The only disappointment was a piece  of date slice I bought that was unfortunately lemon flavoured (why? WHY?! You don’t mess with a date slice recipe!!).

This is a gorgeous artistic community just a little out of Digby and visiting The Flight of Fancy gallery/store was a definite highlight of the day. The owner, Rob, spent ages chatting to us about the different artists (all local, bar one) and the creative process behind a lot of the pieces. Ok, we were the only ones in there, but it was still pretty nice considering we clearly couldn’t afford any fine art on our backpacker budgets! 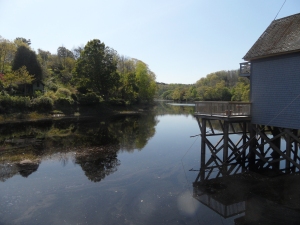 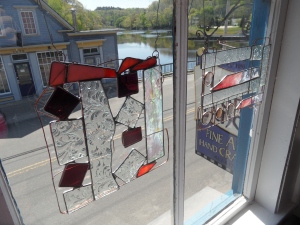 The Flight of Fancy Gallery

We didn’t find any iced tea but we did find a rock that’s over 200 million years old, as well as some pretty amazing coastal views. 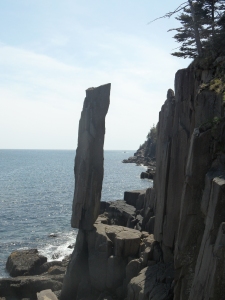 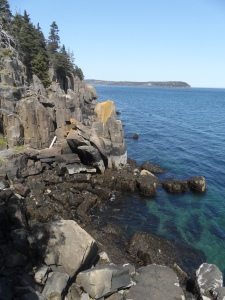 As you can see, it’s not a big stretch of water to cross… 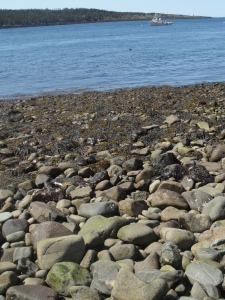 so the ferry journey only took five minutes. Why they don’t just build a bridge, I don’t know! Especially considering the ferry runs every hour, 24 hours a day.

On the ride over, we got chatting to Freddy. He made us repeatedly promise to go to the store and bring him back some brochures to give out to passengers (we didn’t let you down, Freddy!).

Making full use of the car, we literally drove down every road on the island (and some parts that weren’t actually roads – whoops!). Here’s some things we saw along the way… 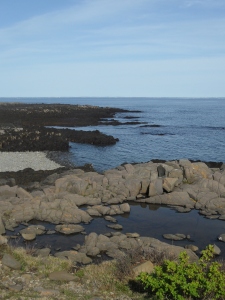 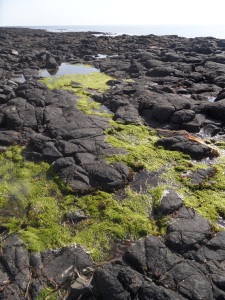 We finished off our afternoon sitting on a deck drinking Keith’s (like good Nova Scotians!). Ahhhhhhh. 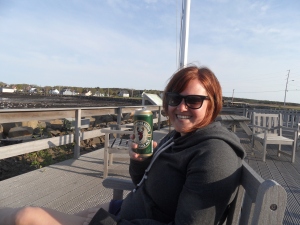 9pm: Back to Digby for their famous scallops. Delicious!

Sidebar: This post took place in the skinny, finger-like area on the West side of Nova Scotia. 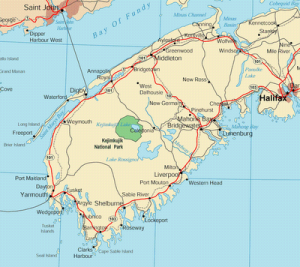